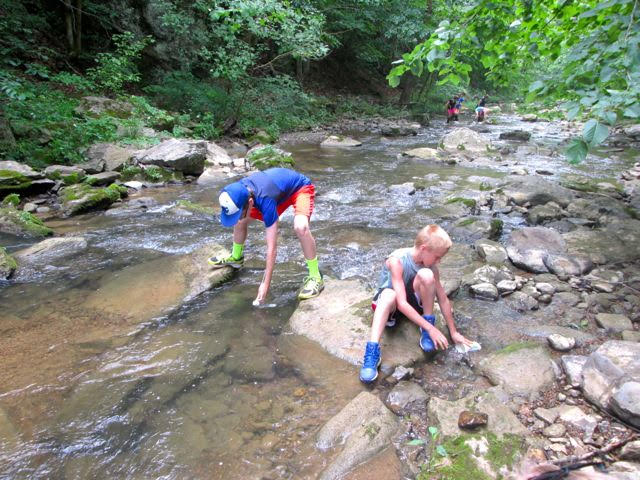 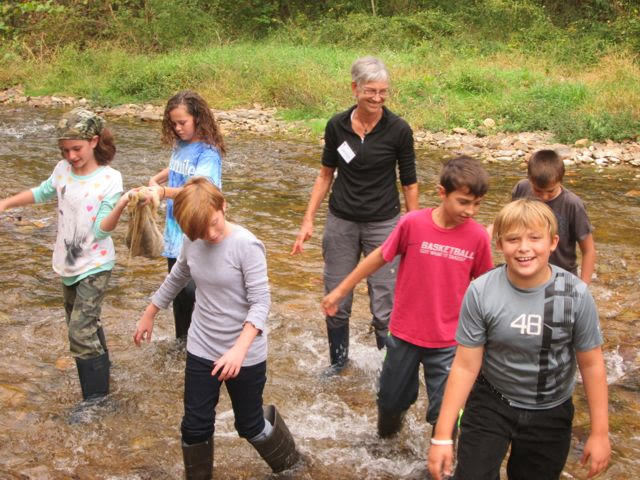 My second most favorite story from Boxerwood’s many river programs takes place a couple of years ago. This story, like all our river stories, starts with my colleague Hannah West and I packing our Subarus.  Into my beat-up vehicle—more flat-bottom dinghy than car—we load five tubs of muck boots; a critter tub with its insect ID cards, ice cube trays, magnifiers, shower curtains, tweezers, and spritzers; and a bunch of 4-ft. seine nets rolled like scrolls. Also the ever-over-flowing tarp tub, a couple of folding chairs, five watershed posters, our good luck towel and the box of rocks (don’t ask, another story).

Into Hannah’s more handsome Forester we place two portable carts with the clipboards, pencils, and data sheets; at least four water-testing buckets with their own sampling jars, test-tubes, test tablets, stopwatches, floaty thermometers, and turkey basters; also, our first-aid backpacks; some dry erase boards; a tub of watercolor kits and their squirrel fur paintbrushes; a couple of trash bags, the camera, and the magic flying carpet blanket. A single cloud in the forecast? We’ve learned. The tub of fifty emergency rain ponchos.

All our streams and rivers in Rockbridge find their way to the James, and then the Bay. As denizens of the Chesapeake Bay watershed, it’s our job to take care of our waterways, we teach the kids, and the land that drains to those streams. So our five-hour programs connect children to their streams in all the ways we can. You’ll be geologists today, we say, and biologists, and chemists, plus poets and painters. Hence all that gear.

Boxerwood has been streamside for a long time now. Most of the kids we meet at the river are between ages nine and twelve, which is another way of saying: recent arrivals to the planet. Every year about a thousand of these newish humans wade into the water, and most will do so at least three times before graduating. This works out to about 4800 children in the past fifteen years. And 540 Subaru loadings, and unloadings.

Even though we teach this program again and again, you never can step in the same river twice, and that’s true of our streamside programs as anything else. Every time: new day, new river, new stories. So, my second favorite river story took place along the South River. For years, a local family has made their private camp available to us, and we can see why they like it so. In the dewy mornings, when you set out the boots, you can turn your head one way and watch the sun rise over Blue Ridge. Turn your head the other and you can watch the river slide along the rock ledges and enter a deep green pool. We’ve seen a bald eagle fly over, and an osprey. One time we even watched a mink leaping ledge to ledge. Tucked away, yet within walking distance of a rural school, it is a fine place to bring kids and a great place for water monitoring.

That fall day, as we were loading up after another great day, one of the schoolchildren came up to me. “Miss Elise,” he said, all excited. “I’m so glad this water is healthy– you know why? Last year my church come here,” he said, “and this is where I done got baptized!”

My top favorite river story also took took place in the fall. We were providing a big full-day program for all the sixth graders from Buena Vista.  The kids had walked a mile with their teachers to meet us at Glen Maury Park. As the case with large programs, we had divided the kids into four concurrently rotating smaller groups. That day I was leading the macro-invertebrate station. In this lesson, students learn how to determine the health of the river by discovering what types of aquatic bugs favor the stream. Thus those boots, seine nets, shower curtains, and ice cube trays.

Kids love this activity because it is filled with slightly transgressive horror and delight. There’s the adrenaline rush of maybe accidentally wading in deeper than your boots, or slipping and falling. There’s also the crazy river dancing to dislodge Hellgrammites & Co., plus the multi-legged hellgrammites themselves and their pinchers and the flailing crawdads and maybe leeches and simply all that hell.

This particular October morning, we had just completed a catch. The kids were already hauling their nets back to base camp. By the river’s edge it was just me and school’s special ed teacher. And out in the river, a boy we’ll call Lucas.

Lucas was about twelve, and husky, as people used to say, though not athletic. He might well have been one of the children who needed help pulling on their Boxerwood river boots. Or finding footing across the slick cobble. He might have been a daydreamer. He might have been born on this planet years ago yet just waking up. Whatever it was, he alone had halted, mid-stride, half-way back to shore.

“Lucas,” called his teacher from dry land, “what’s the matter?” Lucas did not move. He shifted his weight and gazed upstream. That morning, the sycamores glowed golden in the sun. A batch of new mayflies danced above the riffles. Shiny water beetles toodled around and around in the back eddies. But Lucas kept quiet. Out in the current, sheets of glassy water flowed toward him and around him and through him on the way to the faraway sea.

Somewhere, back in the shadows, we could hear the other kids whooping and hollering as they unrolled the crawdads and craneflies from their soggy net scrolls.  Down in the river, though, we sunk. We listened to the rocks. Smelled the wet bark and sand. Watched our boy shift then settle into the river’s thrum.

Then he looked up. The sixty classmates, tarps, test-tubes, data-sheets, and Save-the-Bay lessons all a distant galaxy. He looked up, in wonder, “Mrs. Staton,” he shouted, “I never stood in a river before!”

If you would like to ensure children from all backgrounds can participate in Boxerwood programs, consider donating to the Boxerwood Education Foundation (BEF). All donations received by BEF support Boxerwood’s outreach to students and families from under-resourced households.

Bundled with other BEF donations, your gift provides program subsidies for low-income schools, camp scholarships for children in need, and resources for new and innovative Boxerwood outreach to underserved communities.

A tax-deductible donation can be made online, using the form below,  or by check (specifically made out to Boxerwood Educational Foundation) sent to 963 Ross Road, Lexington, VA 24450.