If you, your children, or your grandchildren visit Boxerwood in 50 years, you will find two towering American chestnut trees in the field. We planted them there last week, thanks to a generous gift from the Virginia Chapter of the American Chestnut Foundation (ACF). The ACF is committed to re-introducing the American chestnut to its native range, with the ultimate goal of biodiversity recovery and environmental protection.

More than a century ago, American chestnut trees were the predominate species in the eastern forests from Mississippi to Maine. They were so prolific that when they put on their white flowers in June, the mountains appeared to be covered in snow. American chestnuts are fast growing trees that can reach a height of 100 feet, with a lifespan of two to three centuries. The trees we planted are about 18″ tall, and I hope you come to see them soon and visit regularly as they grow up. For my part, I relish the thought that my children might bring their children, and so on, to enjoy the shade and beauty (and nuts!) of these trees.

American chestnut trees were a dramatically important part of the ecosystem. Before their near extinction in the early 1900’s, their nuts were a key food source for all kinds of wildlife, and the wood was used extensively for building homes, furniture, and fences.

In 1904, an inadvertently-introduced fungus began killing American chestnuts, and within 40 years they were totally eradicated. Three to four billion trees died over a range of more than 30 million acres. This is generally considered the worst ecological disaster in the history of the world’s forests, similar in scale to the extinction of the bison and the passenger pigeon. The American chestnut tree is classified as “functionally extinct.” The blight does not affect the root system, but as the stumps continue to send up shoots, those shoots are killed by the fungus within a few years.

These trees, bred by the ACF and planted at Boxerwood, are blight resistant – the result of decades of research and breeding. We’ve planted these beautiful American chestnuts in Boxerwood in the hope that this land will continue to be part of a healthy ecosystem well into the future, a refuge for people, plants and wildlife for generations to come.

Also in this issue: 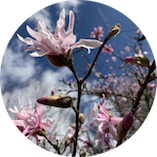